Season 5 of Riverdale is in full swing!

ET recently spoke with star Marisol Nichols, who plays Veronica’s mother, Hermione Lodge, and the actress revealed that there are a lot of fun things in store when Riverdale returns in 2021. 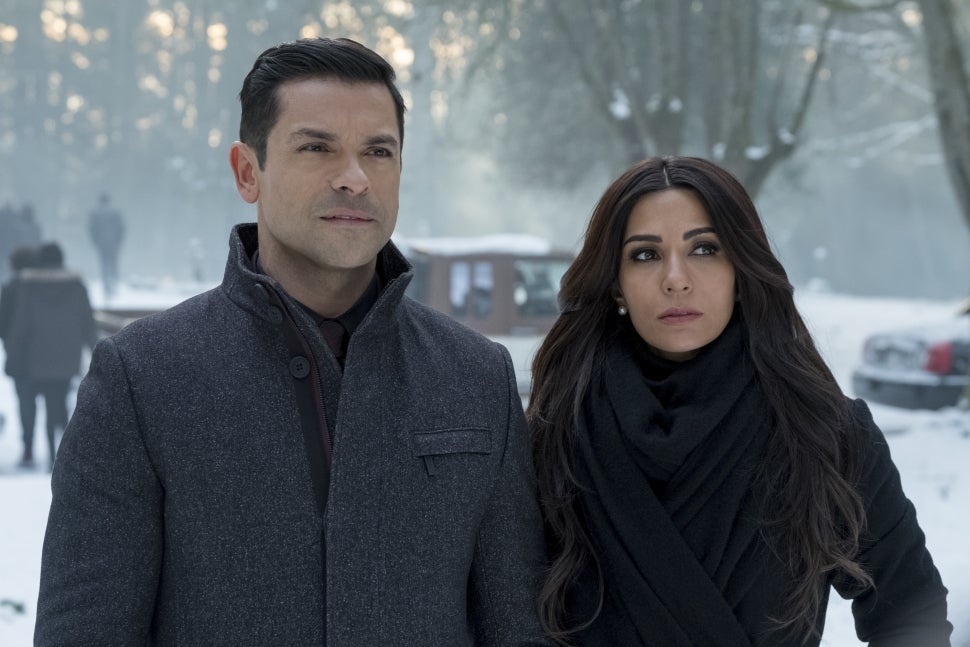 Although the extra COVID-19 precautions and restrictions on set can feel “a little much” at times, Nichols happily reported that “the vibe is good” on set as production on the hit CW series continues.

“Normally we’d be shooting in July, so we didn’t start until the end of September, so I think everyone’s just kind of happy to be working again,” Nichols dished during a virtual video interview last week to promote her upcoming Hallmark Movies & Mysteries original movie, Holly & Ivy.

“Also, it’s a little hard because I’m in Canada and you can’t leave once you’re here. Normally, we’re all used to having a couple days off and flying back to L.A. for the weekend,” she explained. “It’s a lot, but people are really excited about us coming back and I’m really happy about that and I’m grateful for the work.”

“Plus, I’m [a] recurring [guest star on Riverdale] this year, so they can put all my stuff at once,” Nichols said. “I get to go home for a chunk and come back for a chunk because I’m working on other stuff. It’s actually working out fairly well, and I can’t really complain.”

It’s certainly a busy time for Nichols! In addition to her upcoming Hallmark holiday film, ET has learned that Nichols is set to serve as both executive producer and star on a series inspired by her volunteer undercover work battling child sex crimes. The untitled project is currently in development with Sony Pictures Television.

Despite Nichols’ packed schedule, she’s thankful she has the chance to recur onscreen on Riverdale’s fifth season.

In February, it was reported that both Nichols and Skeet Ulrich would not be returning to Riverdale after the drama’s fourth season. However, when production on The CW series was halted due to coronavirus-related concerns in March, executive producers were forced to cut the season short.

Shortly after Riverdale’s season 4 finale aired in May, series creator Roberto Aguirre-Sacasa confirmed to ET that both Ulrich and Nichols would be returning for season 5 so that fans could give a proper goodbye to FP Jones and Hermione Lodge.

Just a few weeks later, Ulrich revealed during an Instagram Live in May that it was his choice to leave the series. “I’m leaving Riverdale because I got bored creatively,” the actor bluntly admitted.

However, after recently speaking with Nichols, it appears that the fan-favorite actress was not offered the same opportunity to decide Hermione’s onscreen fate. When asked why she originally decided to leave Riverdale at the end of season 4, the 46-year-old actress was careful with her response.

“How do I put this? That’s a good question,” she said. “It wasn’t necessarily a choice.”

“It’s just kind of what happens,” she added.

Despite the higher-ups’ decision, Nichols revealed that she had one very important piece of unfinished business for her character.

“Well, one of the things that was really important for me, if I was going to come back and wrap things up or do some more episodes, was that Hermione stick up for herself,” the actress explained. “It was really bothering me that she was in, for all intents and purposes, kind of in an abusive relationship.”

“She changed who she was to be with Hiram and, not that she’s innocent, but it bothered me. It bothered me just as a woman,” she continued. “I wanted to see her have some strength and some power and stand on her own two feet and not be stupid — for lack of a better word. So that was really important to me and Roberto honored that and I’m very happy about what I’m doing so far.”

Nichols confirmed Riverdale is set to begin production on the highly anticipated time jump episodes this week and that fans will be seeing what Hermione is up to in the future.

“[Hermione] doesn’t look that different,” Nichols added with a smile. “I was trying to think, ‘What do I want to do?’ And I was like, ‘Nothing.’ This woman has all the money in the world. I’m sure she gets everything done. I’m, like, it’s fine, just leave it.”

As for Nichols’ onscreen daughter played by Camila Mendes? The actress dished that Veronica’s relationship status could be changing.

“I would say what I can tease is that it’s true about life. When you’re a teenager, relationships are very complicated and they get sometimes too serious and you’re not sure if you like this one or you like that one. Well, that follows you along as you grow up and it doesn’t necessarily get easier and we will see that with Veronica.”

We at ET confessed to Nichols that we’re hoping Hermione will be able to break free from Hiram’s clutches — and we were pleased with her tease.

“Let’s just say I’m on that same page and I think I’ll leave it there,” she answered coyly.